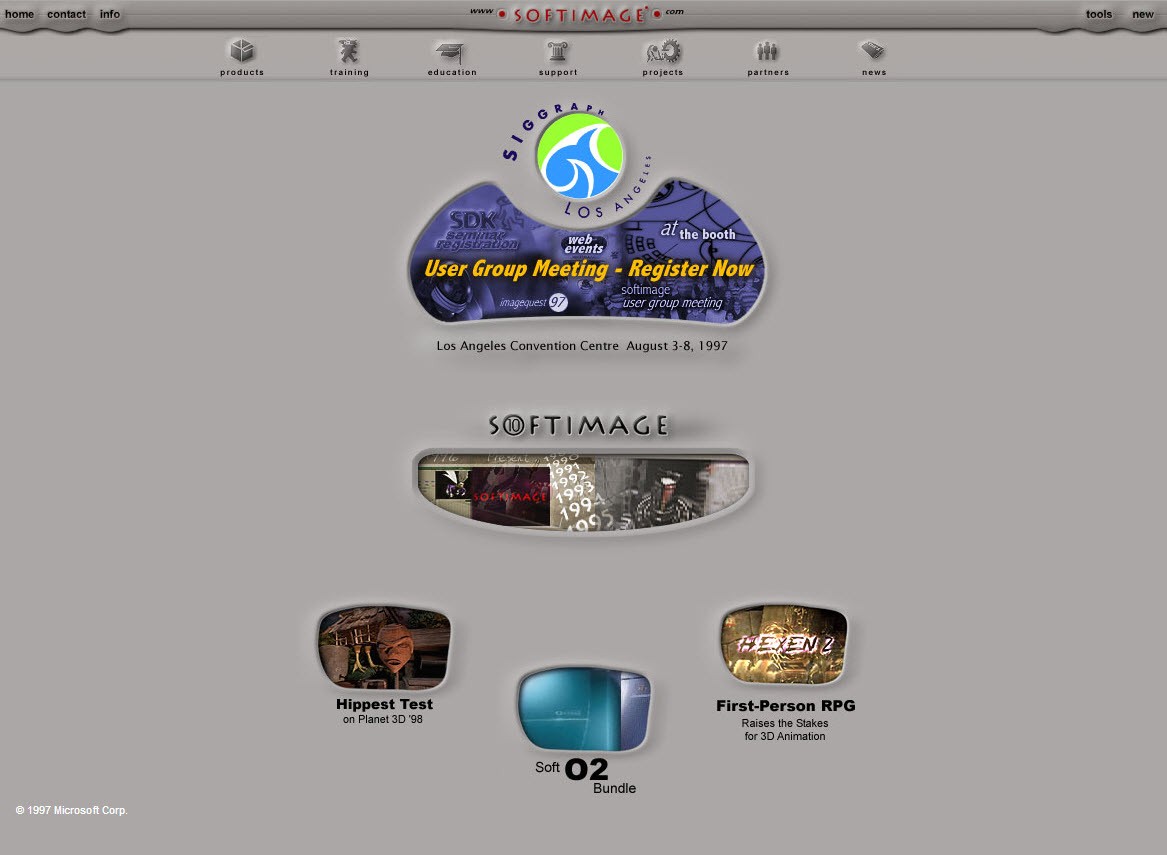 The past 12 months have probably been the most agitated period in the history of 3D graphics and animation software. Competition between manufacturers has never been so fierce, with one company trying to outdo another in terms of performance and features. This “features war” has created a very interesting side effect: the line between cutting-edge, high-end software and the lower end programs has become increasingly blurred. And then there were the acquisitions: Softimage was acquired by Avid, Electric Image by Play, Discreet Logic by Kinetix. As if things weren’t exciting enough, fierce price battles started to happen between high-end 3D software companies with Softimage practically slashing their prices in half and Maya charging less than $8,000 for a software package that used to cost around five times as much.

There was a time when there used to be a pretty large gap between what were considered high-end 3D animation programs and the rest. Softimage, Prisms (now Houdini) and Alias|Wavefront (now Maya), for example, used to be the companies introducing the very latest innovations to the market. These programs were complex, very expensive to own and used to be the exclusivity of very large animation and special effects houses or very well funded film and video post-production facilities. Lucky were the few animators who got to work with these programs and they used to form the elite of computer graphics. The more common and affordable programs such as LightWave and 3D Studio (MAX) were always trying to catch up to the big boys, offering similar features months after they were introduced by the cream of the crop. And while this class of programs became increasingly more complex and their use in actual production rose, the tools offered were never as sophisticated or as powerful as those offered by the high-end applications.

Those who used both classes of programs knew what the difference felt like. High-end applications offered very complete tools and one task could be accomplished in many different ways. Options was the name of the game and the look of the animators’ work was dictated by his/her ability, not by the limitations of the software. Lower end programs, on the other hand, usually offered just one way of accomplishing a task and since the tools were mostly subsets of their high-end cousins, things were a lot harder on the animator. High-end programs automatically took care of things that required the operator of a low-end program hours to do by hand.

And then there was another gap: the power gap. High-end applications ran on very powerful, dedicated workstations such as Silicon Graphics that used to cost a lot of money but were years ahead in terms of graphics performance and rendering speed. Lower end applications ran on above average PCs, Macs and Amigas, which were much slower to work with.

But that’s all history. Interesting factors have changed the industry completely. Dedicated graphics workstations reached a performance peak and advances in technology began to happen more slowly. On the other hand, run-of-the-mill computers started to benefit from advances in processor speeds and graphics display technology and began to catch up.

Quickly NT workstations and Macs became available that rivaled the power of dedicated workstations at a fraction of the price. This caused the 3D animation software technology leaders to port their programs to these platforms and, all of a sudden, they were racing on the same turf as their lower end peers. Animators and facilities that could not previously afford such power were now able to get aboard the cutting-edge express and even corporate in-house facilities started to take advantage of the power offered by higher-end applications.

If we rewind our tape a little bit we will notice that while high-end programs were the center of attention and filled the wish lists of naughty and nice boys and girls alike, more popular programs were selling in much larger quantities. 3D Studio, for example, was the best selling 3D program of all, with many times more seats than any of the higher-end programs. Similarly, LightWave was being used by a vast number of facilities and freelance animators, some of which were able to produce works that rivaled in quality the work of the better funded competition.

There is definitely power in numbers and, as a result, the lower end companies began to benefit from larger sales and consequently higher investments in technology.

That and the fact that their open architecture opened the doors to partnerships with many smaller software companies (which produced plug-ins that expanded the power of their software) led them to climb on the stage and participate in some very important productions. Electric Image in Terminator 2, LightWave in Titanic and 3D Studio MAX in Johnny Mnemonic are just at few examples of the influence these programs began to exert in the entertainment industry.

The past 12 months have closed the gap between higher-end and lower end software even further to the point where they are truly competing against each other. The price slashing by the technology leaders made them affordable to practically anyone while the technology advancements by the other companies turned their software into viable alternatives to practically any level of production.

Sure there are still differences. For instance, it is hard to beat the sheer power of Houdini when it comes to very complicated scenes. At the same time, Softimage and Maya still have an advantage when it comes to sophisticated character animation. These programs also feature more advanced and intuitive interfaces that resulted from the feedback of the best artists in the industry.

On the other hand, programs like 3D Studio MAX, LightWave, Electric Image and Cinema 4D are capable of producing not only very good looking output, but also very sophisticated results. The former group of programs is still more complex and harder to learn but, once mastered, offer great workflow.

Artists using these programs usually have more production experience, can get things done faster and, consequently, can demand higher salaries. The latter group, on the other hand, consists of programs that are easier to learn and can be put into production faster. Because they also have more users out there, it makes it easier to hire animators-an important consideration for smaller companies.

If things continue to move in the same direction, pretty soon there may not be a line separating these software categories anymore. Prices and features may get to the same level and choosing a program over the other may become a simple matter of preference.

The interesting result of the exciting developments in this field is that you, the end-user, are the one benefiting the most. Affordable high-quality 3D is out there, within your reach.

Paulo de Andrade is president of Digital Reality, a TV production and animation company in Seattle, WA, area. You can email him at dr@technoart.net.

What Does It Take To Be An Oscar Nominee?
Meet David Salomon, Author and Photographer
Virtual Experiences The New Reality
YouTube Pays $170M Over Accusations It Broke Children’s Privacy Law